Lust, Inevitably Leads To Loneliness Or Something Like That.

My Life Stories, From the highest to the lowest, and the grey area crap inbetween that forms my life so far…

Archive for the tag “Moving out”

Wednesday the 23rd of February….

So here I’m thinking, Jesus its been a while………

No I’m not praying. I’m surprised at how long its been since my last blog!!!

Population of 100,000 people, and so far i only know my land lady, whose 60, and other residents who are around the same age unfortunately. As far as uni goes, its a mish mash of the multicultural experience where i have met only a few people, but hopeful my endeavours of student night tonight, will go far.

As for my accommodation I’m staying in a colonial house built in the 1840’s and was apparently called “Pinky’s farm” and the first owners, actually owned most of the land outside Launceston city, but apart from that history lesson, its a nice house, but a big fucking nice house

Here’s some pictures of my room! ENJOY!

Now as for my uni, I’m attending The Australian Maritime College : http://www.amc.edu.au/

Now with my boredom level creeping up slowly, my hopes are held high for this student night tonight!

I haven’t told you about my exciting time since I’ve last “blogged” (hahah still have a strange feeling when saying that), My birthday oh that was a night i wish i completely remembered,  and my boys nights before i left Sydney!

My one and only birthday picture i took:

Yes… Me in my drunken state thought it’d be funny to take a picture of my vomit, the only part you’d find funny is that i slipped in it on the way back…. Yummy…

As for my birthday i had a little shindig at my place, where i drank myself silly for the afternoon. As for the night me and my mates booked a hotel room in a place called “Cronulla” to which we stumbled in with alcohol induced mischief! Now if the slipping in vomit didn’t make you giggle or at least smile, then imagine me trying to talk to a girl because she was obviously distraught over some fella and then i got flicked on the nose, quite literally flicked on the nose! Now I’ve had a slap or an angry expression but a flick was by far the most amusing rejection I’ve ever had, i nearly fell on the floor laughing at the time!

Now the mischief after involved getting excessively  drunk and topples…. With the mates hahaha

Apart from that, the morning left me something like the morning after my friends and i walked the harbour bridge after the pub… As you can see… 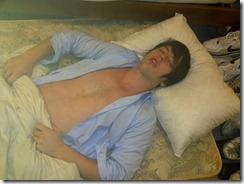 My mate Floyd “the morning after”…

Here’s some of the boys and me on the saturday night:

Now I shall love you and leave you for next time

because I’m off to succumb to my Deprived, Traumatic, Fun!

Yours the hopeful and a year older